What Is Docker And What Is It Used For?

by admin
in Tricks & Tutorial

Docker is the silver bullet that solved the problem with software containers and virtualization once and for all. Yes, that’s a strong claim! Other products had attempted to deal with these problems, but Docker’s fresh approach and ecosystem has wiped the competition off the map. This guide will help you understand the basic concepts of Docker, so that you can get started using it for your own applications and adopt it into your workflow.

The History of Docker

Docker was created in 2013 by Solomon Hykes while working for dotCloud, a cloud hosting company. It was originally built as an internal tool to make it easier to develop and deploy applications.

Docker containers are based on Linux containers, which have been around since the early 2000s, but they weren’t widely used until Docker created a simple and easy-to-use platform for running containers that quickly caught on with developers and system administrators alike.

In March of 2014, Docker open-sourced its technology and became one of the most popular projects on GitHub, raising millions from investors soon after.

In an incredibly short amount of time, Docker has become one of the most popular tools for developing and deploying software, and it has been adopted by pretty much everyone in the DevOps community!

How Does Docker Work? 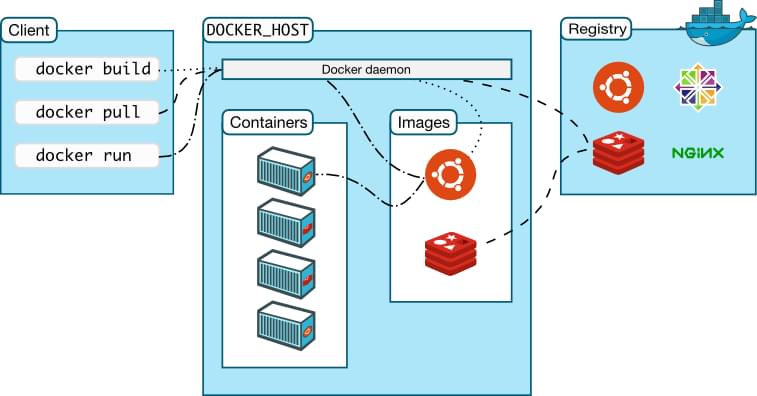 Docker is a technology that allows you to build, run, test, and deploy distributed applications. It uses operating-system-level virtualization to deliver software in packages called containers.

The way Docker does this is by packaging an application and its dependencies in a virtual container that can run on any computer. This containerization allows for much better portability and efficiency when compared to virtual machines.

These containers are isolated from each other and bundle their own tools, libraries, and configuration files. They can communicate with each other through well-defined channels. All containers are run by a single operating system kernel, and therefore use few resources.

As mentioned, OS virtualization has been around for a while in the form of Linux Containers (LXC), Solaris Zones, and FreeBSD jail. However, Docker took this concept further by providing an easy-to-use platform that automated the deployment of applications in containers.

Here are some of the benefits of Docker containers over traditional virtual machines:

Let’s now take a look at some of the components and tools that make it all possible.

In addition to these core components, there’s also a number of other tools that work with Docker, including:

There’s even a number of services supporting the Docker ecosystem:

For starters, a container is a self-contained unit of software that includes all the dependencies required to run an application. This makes it easy to package and ship applications without having to worry about compatibility issues. Docker containers can be run on any machine that has a Docker engine installed.

These containers are isolated from one another and bundle their own tools, libraries, and configuration files, and they can communicate with each other through well-defined channels.

Docker containers are built from images, which are read-only template with all the dependencies and configurations required to run an application.

A container, in fact, is a runtime instance of an image — what the image becomes in memory when actually executed. It runs completely isolated from the host environment by default, only accessing host files and ports if configured to do so. As such, containers have their own networking, storage, and process space; and this isolation makes it easy to move containers between hosts without having to worry about compatibility issues.

Images can be created by either using a Dockerfile (which contains all the necessary instructions for creating an image) or by using Docker commit, which takes an existing container and creates an image from it.

What’s in a Docker Container?

Docker containers include everything an application needs to run, including:

A container shares the kernel with other containers and its host machine. This makes it much more lightweight than a virtual machine.

How to Run a Container?

Docker containers are portable and can be run on any host with a Docker engine installed (see How to Install Docker on Windows 10 Home.

To run a container, you need to first pull the image from a registry. Then, you can create and start the container using this image.

For example, let’s say we want to launch an Alpine Linux container. We would first pull the Alpine Docker image from Docker Hub. To do that, we use the docker pull command, followed by the name of the repository and tag (version) that we want to download:

This particular image is very small — only 5MB in size! After pulling it down to our system using docker pull, we can verify that it exists locally by running docker images. This should give us output similar to what’s shown below:

Now that we have the image locally, we can launch a container using it. To do so, we use the docker run command, followed by the name of the image:

This will give us an error message telling us that we need to specify a command to be executed inside our container. By default, Docker containers won’t launch any processes or commands when they’re created.

We can provide this command as an argument to docker run, like so:

Here, all we’re doing is running the echo program and passing in “Hello, World!” as input. When you execute this line, you should see output similar to what’s shown below:

Great! We’ve successfully launched our first Docker container. But what if we want to launch a shell inside an Alpine container? To do so, we can pass in the sh command as input to docker run:

The -i flag stands for “interactive” and is used to keep stdin open even if not attached. The -t flag allocates a pseudo TTY device. Together, these two flags allow us to attach directly to our running container and give us an interactive shell session:

From here, we can execute any commands that are available to us in the Alpine Linux distribution. For example, let’s try running ls:

If we want to exit this shell, we can simply type exit:

And that’s it! We’ve now successfully launched and exited our first Docker container.

For another practical case, check out Setting Up a Modern PHP Development Environment with Docker.

Why Would You Use a Container?

There are many good reasons for using containers:

We’ll end this guide with some tips on best practices and handy commands for making the best use of Docker.

There are a few best practices that you should follow when working with Docker:

If you want to learn more about Docker, here you have a commands list to get you started:

Finally, use a text editor like Vim or Emacs to edit your Dockerfile.

For a full deep dive into docker, check out the book Docker for Web Developers, by Craig Buckler.

Docker is a powerful tool that can help you automate the deployment of your applications. It’s simple to use and doesn’t require you to install any dependencies on your host machine.

Over the past few years, Docker has become one of the most popular tools for developing and deploying software. It’s used by developers to pack their code and dependencies into a standardized unit, which can then be deployed on any server. Additionally, Docker also enables developers to run multiple isolated applications on a single host, making it an ideal tool for microservices.

If you’re looking for a tool that can help you streamline your workflow and make your life as a developer and sysadmin easier, then Docker is a mandatory tool to add to your box.

Beginners Guide: What Is Python And What Is It Used For?

No Result
View All Result